Junagarh Fort – The magnificent Junagarh Fort of Bikaner served as the foundation for the city of Bikaner. The fort was originally known as Chintamani, but in the 20th century, it was renamed the Junagarh or Old fort. Rao Bika constructed the Junagarh fort’s foundations in 1478. However, it was just a stone fort at the time. On February 17, 1589, the grand structure that we see today was unveiled.

The gardens, balconies, kiosks, and palaces within the fort, depict a fusion of architectural styles that were influenced by the various rulers’ cultural differences as well as influences from other countries. The fort’s unique monuments, which date back to the late 16th century, depict 16 generations of Bikaner rulers.

Raja Rai Singh built Junagarh Fort in 1594, which is in the Thar Desert. This location is dotted with temples, palaces, and pavilions and is situated on a 5.28-hectare expanse of land. A moat that is now dry surrounds its 986-meter-long wall, which has 37 bastions. There are seven palaces within close proximity to the fort, namelyPhool Mahal, also known as the “Flower Palace,” Anup Mahal, Chandra Mahal, Ganga Mahal, Badal Mahal, and Bikaneri Havelies. The grand palace and massive walls are a must-see on any Bikaner tour.

click here:- Chitradurga Fort Karnataka All you need to Know In 2023

Rao Bika laid the Junagarh fort’s foundation in 1478. Previously, it was merely a stone fort. The current Junagarh fort was constructed to safeguard the Bika-built stone fort. Around the formidable fortress, the city of Bikaner was founded in 1472. Foreign foes made numerous attempts to seize it. Nevertheless, all but one failed. During Rao Jait Singh’s reign in 1534, Babur’s son, Kamran Mirza, took control of the striking fort for just one day.
From 1571 to 1611, the sixth ruler of Bikaner, Raja Rai Singh, led the city to prosperity.

Raja Rai Singh accepted Mughal rule and rose to prominence during Akbar’s and Jehangir’s reigns. He received numerous accolades and jagirs for his victories in various wars. Raja Rai Singh began building the Junagarh fort after gaining prominence under Mughal rule. The impressive fortress’s foundation took place on February 17, 1589, and construction was completed on January 17, 1594. The fort was designed by Raja Rai Singh, an artist who also knew a lot about architecture, to be a grand structure in the Thar Desert.

The layout of the Junagarh fort is rectangular and measures approximately 1078 yards in length. The area it covers is 63119 square yards. The initial purpose of the fort was to protect the previous stone fort that Rao Bika had constructed. It once had a moat for security reasons, but it is no longer there. Numerous palaces with exquisite designs are enclose within the magnificent fortress. The ruler’s heritage and culture have influenced every structure, including balconies, gates, kiosks, and others.

The red and gold sandstone stone carvings are one of the main features of Junagarh Fort. Red sandstone is use in all of the structures. The ancient Rajasthani style is use to decorate the interior. The seven gates of the grand fort are surround by numerous palaces and Hindu and Jain temples. Additionally, it has two main gates made of golden sandstone. In the past, entry was made with the Karan Pol, but now it is with the Suraj Pol. Because it faces east, the Karan pol receives the sun’s first rays. A beautiful sight, the golden rays on the yellow sandstone are also regard as a positive sign. This fort’s extravagant structures and exquisite beauty attest to the aristocratic lifestyle that existed here centuries ago.” A paradox between medieval military architecture and beautiful interior decoration,” is a description of the Junagarh Fort. 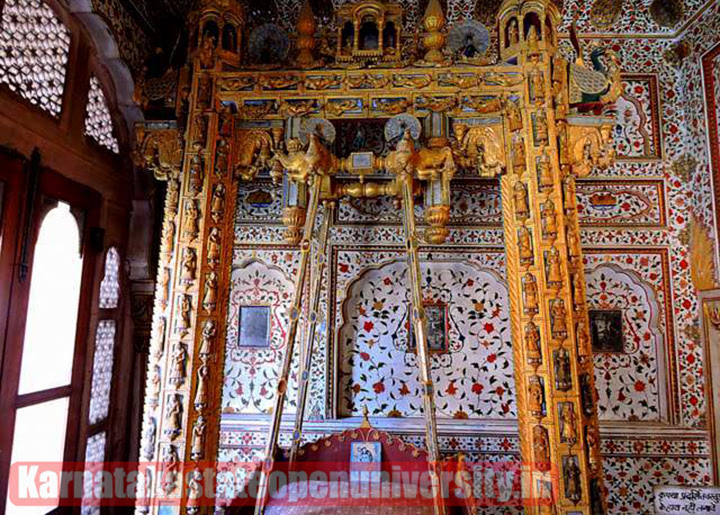 Structures inside the Fort

The Junagarh Fort is fill with beautifully design palaces, building and kiosks. The architectural wonders are enough to spellbind the visitors of fort.

There are seven gates in the fort. There are two main gates out of these: the Karan pole, which was the previous main entry gate, and the Suraj pole, which is the current min gate. The Suraj pol is made of yellow sandstone. The golden face of the Suraj pol is a sight to behold when it receives the first sunrays because it faces east. Two red stone statues of elephants accompanied by mahouts stand at the gate’s entrance.

Daulat pol (double gate), Chand pol, and Fateh pol are the fort’s other gates. The Daulat Pol contains a number of handprints from the women who committed Sati on the funeral pyres of their battlefield-dead husbands. Every one of the doors genuinely deserve the lovely royal residence that they lead to.

The royal temple of the fort is the Har Narayan temple which is dedicate to Lord Lakshmi Narayan and his wife, Lakshmi. The Ratan Behari temple is also locate near Junagarh fort. It is that dedicate to the Hindu God Krishna.

As mentioned before, the palaces in this fort are marvellous pieces of art and architectures.

1. The Karan Mahal was built by Karan Singh in 1680 to commemorate his victory over Aurangzeb of.
2. The Phool Mahal is the oldest palace in the fort which is was built by Raja Rai Singh.
3. Anup Mahal was use as the administrative headquarters of the kingdom of. It is a multi-storey building with sophisticate designs.
4. Chandra Mahal is the most luxurious and aesthetically pleasing palace in the Junagarh fort.
5. Ganga Mahal was built in the 20th century by Raja Ganga Singh. That is houses a museum now.
6. Badal Mahal is an extension of the Anup Mahal and consists of many brilliant paintings.
7. Bikaneri havelis are locate both inside and outside the fort and have a unique architectural style.

The museum in the fort was built by Maharaja Dr Karni Singhji in 1961 century. The museum consists of various paintings, jewels and other commemorations depicting the royal life the fort had once witness. check:- Jaisalmer Fort: Golden Fort of Rajasthan All you need to Know In 2023

Junagarh Fort is full of admirable structures that it include palaces, temples, gates, and museums that are visit by tourists. Some of the places to not miss on a trip to Junagarh Fort are is:

There are seven gates in the magnificent Bikaner ka Kila; however, only two of them are the main ones Karan Pol and Suraj Pol. Karan Pol was use for entry/exit in the old times, and Suraj Pol is the current main gate. Suraj Pol is a beautiful structure made in yellow sandstone and looks the best when it is met by the first rays of the sun in the morning. It is adorn by two statues of elephants made in red sandstone.

What is a fort without beautiful, royal palaces? Junagarh Fort, Bikaner houses several palaces which were built and develop by different rulers who live in the fort during their respective empires. The most prominent ones among them are:

In the Bikaner fort of Junagarh, there are temples to various gods. The Har Narayan temple is dedicate to Goddess Lakshmi and Lord Lakshmi Narayan. It was the royal family’s private temple. Near the fort, there is another temple to the Hindu god Krishna called Ratan Behari temple. White marble was used to construct it in the Indo-Mughal architectural style.

Visitors to Junagarh Kila, Bikaner, can take their time exploring the fort’s museum. In 1961, Dr. Karni Singhji constructed it. The life of the kings who rule and live in Bikaner is depicter through a variety of paintings, jewelry, and other items in the museum. Palanquins, royal costumes, farmans (royal orders), dresses of gods’ idols, and Sanskrit and Persian manuscripts are among the exhibits in the museum. Additionally, the museum is well-known for its collection of post-medieval armour.

How to Reach Junagarh Kila, Bikaner?

The best way to get to Bikaner from other cities is by road. From cities like Jaisalmer, Udaipur, Ajmer, and Delhi, RSRTC buses go to Bikaner. The air route to the city is also convenient. Jodhpur is the closest airport, with numerous flights from Mumbai and Delhi.
Junagarh Kila in Bikaner appreciates simple openness from all places in Bikaner. The fort is conveniently locate in the city’s center and can be reach by car, bus, taxi, or even auto rickshaw. From various locations in the city, public buses also travel to the fort.

The best opportunity to visit any spot is the point at which you could feel completely open to investigating it without the effect of weather patterns. Bikaner’s Junagarh Fort is in the Thar Desert, where the summers are hot. Accordingly, it is suggest that the travelers visit Junagarh Stronghold during the cooler months from November to February.

For a fun-filled day trip in Bikaner, Junagarh Kila is an excellent choice. It is the primary destination in all Bikaner tour packages due to the location’s significance and appeal. When you go to the fort, remember to bring water, wear comfortable shoes, and put on sunscreen because you’ll be walking a lot.

One of Bikaner’s most well-known forts, Junagarh Fort has stunning architecture and significant historical significance. There are numerous havelis and a variety of temples, museums, and palaces within the fort, including the Karan Mahal, Anup Mahal, Phool Mahal, and Chandra Mahal. This is one of the few major forts in Rajasthan that isn’t on a hill. It was built by Raja Rai Singh, who was the sixth ruler of Bikaner and rule from 1571 to 1611 AD.In 1594, the construction was finish. This post was work in 1478 by Rao Bika who laid out the city of Bikaner in 1472. Rao Bika was the second son of Maharaja Rao Jodha, the founder of Jodhpur city and a member of the Rathor clan.

In order to establish his domain, he conquer the vast, arid lands in the northern part of Rajasthan. The current Junagarh fort was construct to safeguard the Bika-built stone fort. Around the formidable fortress, the city of Bikaner was found in 1472. Foreign foes made numerous attempts to seize it. Nevertheless, all but one failed.

Amer Fort Jaipur All you need to Know In 2023

Chittorgarh Fort: A epic tale of love, courage and Sacrifices All about History In 2023

Mehrangarh Fort In Jodhpur All you need to Know in 2023