Longest River in India 2023 – India is famous as the land of rivers as many rivers flow across the country. India is the land of rivers and these mighty water bodies play a huge role in the economic development of the country. Rivers in India are divided into two parts, namely Himalayan rivers (rivers originating from the Himalayas) and Peninsular rivers (rivers originating in the peninsula). Himalayan rivers are perennial while peninsular rivers are dependent on rainfall. Here, in this article, we will talk about the top 10 longest rivers in India. 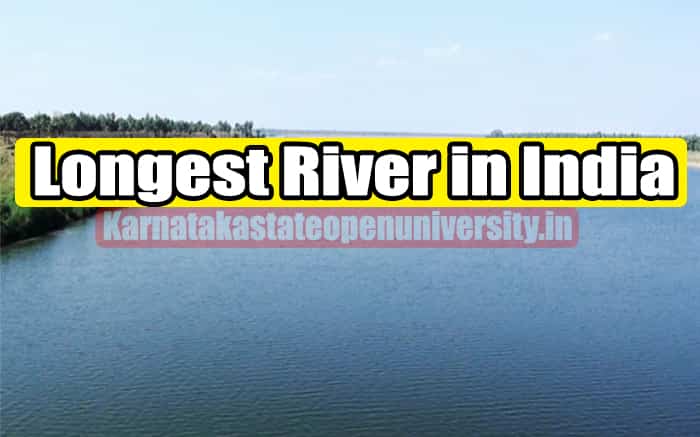 Largest River In India by its Length

Ganga, known as Ganga Mata in India, is the holiest river for Hindus and is worshiped as Goddess Ganga. Sadly, it is one of the most polluted rivers in the world. Rising in the Himalayas, it originates from the Gangotri Glacier in Uttarakhand and empties into the Bay of Bengal, the Ganges flows through one-fourth of India’s territory, and its basin supports hundreds of millions of people. The Ganges is the longest river in India and the third-largest river in the world. The states covered by this reservoir are Uttarakhand, Uttar Pradesh, Bihar, and West Bengal. The last part of the Ganges ends in Bangladesh. The Godavari is the second-longest river in India after the Ganges. It has been revered in Hindu scriptures for many centuries and has been nurturing and nurturing a rich cultural heritage. The Godavari is the longest river in South India and is also known as ‘Dakshina Ganga’. The river originates from Trimbakeshwar, Nashik in Maharashtra and passes through Chhattisgarh, Telangana, and Andhra Pradesh, and covers a length of more than 1450 km in the Bay of Bengal.

The Krishna River (also known as Krishnan) originates in the Western Ghats near Mahabaleshwar in Maharashtra. It is one of the most important peninsular rivers of India which passes through the states of Maharashtra, Karnataka, Telangana, and finally joins the Bay of Bengal in Andhra Pradesh.

The Yamuna River is the longest tributary of the Ganges. The Yamuna originates from Yamunotri Glacier at Bandarpoonch peak in Uttarkashi, Uttarakhand. It crosses the states of Uttarakhand, Delhi, Himachal Pradesh, Haryana, and Uttar Pradesh covering a distance of 1,376 km.

The Narmada River (also known as Rewa) is the largest west-flowing river in peninsular India. The Narmada originates from the Amarkantak mountain range in Madhya Pradesh. It is one of the seven sacred rivers of India and is mentioned in various ancient scripts of the Hindus. The river merges into the Arabian Sea after covering a distance of more than 1300 km.

The Indus River is the birthplace of the ancient Indus Valley Civilization and has immense historical significance. The name of our country is also considered after this great river. The Indus River originates from Lake Mansarovar and crosses Ladakh, Gilgit and Baltistan. The river then enters Pakistan. The Indus Water Treaty between India and Pakistan allows India to use 20 percent of the total water brought in by the Indus River. Some of the major tributaries of the Indus River include Kabul (river), Jhelum, Chenab, Ravi, Beas, and Sutlej River. The total length of the Indus River is 3180 km. However, its distance within India is only 1,114 KM.

The Brahmaputra, one of the major rivers of India, originates from the Angasi Glacier in the Himalayas in Tibet. There it is known as the Yarlung Tsangpo River. The river enters India through Arunachal Pradesh. Then it enters Bangladesh via Assam. The Brahmaputra delta is home to 130 million people and 6,00,000 people living on the river’s islands, and the river is popularly known as the ‘lifeline of Assam’.

Mahanadi is a compound of two Sanskrit words maha (“great”) and Nadi (“river”) meaning great river. The river originates in the Sihawa mountains of Chhattisgarh and has its major flow through the state of Odisha. The Mahanadi River collects more silt than any other river in the Indian subcontinent. World’s largest earthen dam: The hirakud Dam has been constructed on the Mahanadi river near Sambalpur city in Odisha. Behind the Hirakud Dam is the 55 km long Hirakud Reservoir which is one of the longest artificial lakes in Asia. Kaveri or Kaveri is the largest river in Tamil Nadu. The Kaveri rises from the foothills of the Western Ghats at Talakaveri in the Kodagu district of Karnataka. The river flows in a southeasterly direction through the states of Karnataka and Tamil Nadu and empties into the Bay of Bengal, Tamil Nadu. Along its journey from the Kodagu hills to the Deccan plateau, the Kaveri river forms two islands at Srirangapatna and Shivanasamudra. Kaveri River is also known as the Ganga of the South

Tapti River Tapti originates from peninsular India flows through Madhya Pradesh, Maharashtra, and Gujarat, and joins the Arabian Sea. It is one of only three peninsular rivers in India that flow from east to west. The Tapti River nurtures and supports the wildlife in the Melghat forest, famous for its rich flora and fauna.

It is difficult to pinpoint the longest river in India, as there are many more rivers than people living in the country. The river Ganges and Brahmaputra are some of the most famous rivers in India. The water of all these rivers is highly revered by Hindus and those who live near them. In fact, it is believed that a person who bathes in the holy waters of any one of these rivers will be granted salvation by God. Let us know if you want to read about any other interesting facts about this topic.